At the RMS Spring Symposium, Dr. Christine Suurtamm used the following scenario as a springboard to talk about Math content knowledge and pedagogical content knowledge (i.e., what is important mathematically and how to help a student learn about it). 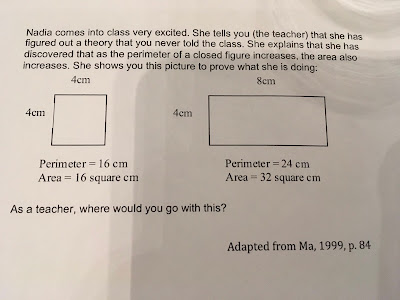 There was lots of rich discussion.  It made me think about taking three sides of a polygon and moving the middle side out.  Here the right side of the square has been moved out to make a rectangle with larger area and larger perimeter.  I called this "extrusion" but am not sure that is mathematically correct and became uninterested in whether the new side was parallel to the old one.

For a simple quadrilateral, it makes sense to me that as you move the middle side out, the area gets bigger. 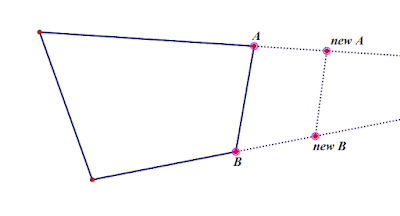 The perimeter looks like it is getting bigger (i.e., that AC + CD + DB is bigger than AB) but I wondered if the decrease in CD might be bigger than the increase along the ray formed by the containing sides (AC + DB).

So the new perimeter is bigger than the old one.

I started to feel smug and accomplished and then I thought about a counter-example, 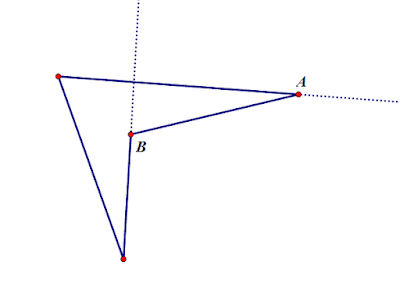 As a teacher, where would you go with this?

Here is another interesting setup, shared in Tom Steinke's OAME 2017 session.  I have seen circles around squares and circles inside squares, but not circles and squares sharing a baseline. 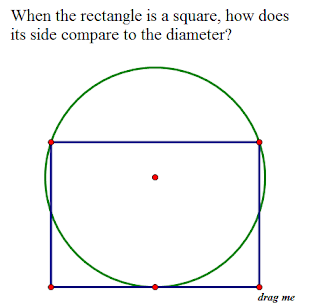 I think a student could do a lot of productive reasoning about what the situation would look like prior to using the interactive sketch.

Opening the sketch and dragging the point, without showing the measurements, is interesting.  How close is a student's guess about where the position of the drag point must be for the rectangle to be a square?  How close is there estimation of the relationship between the square's side and the diameter?

Lastly, they could choose an arbitrary diameter, like 100, and see if they can verify the result. Surprisingly, everything comes out nice and evenly with narry a square root of two in sight!
Posted by Ross Isenegger at 8:23 AM No comments: 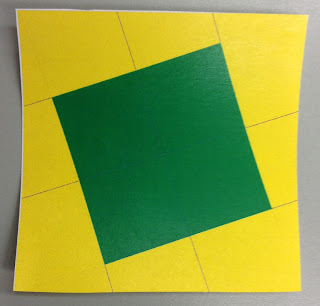 Do you find this as counter-intuitive as I do?
Posted by Ross Isenegger at 5:55 AM 1 comment:

Yesterday, Greg Clarke and I gave a session at OAME 2017, entitled "Reasoning and Proving with Relational Rods".  Toward the end, we talked about partitions of a number and Young Diagrams. There are 297 partitions of 17, including:


There are only five partitions of 17 that have distinct odd parts:
A Young Diagram is an arrangement of squares, that corresponds to a partition.  You can create Young-like diagrams using the Relational Rods+ and the Colour Tiles mathies Learning Tools. 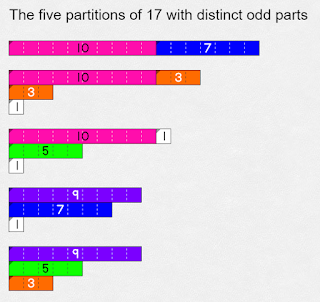 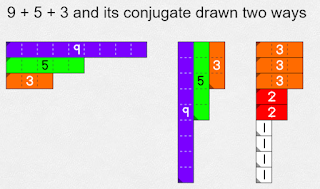 It turns out that there are five partitions of 17 that are self-conjugates.  Can you find the other 4? It is more fun if you use Colour Tiles, since you have the reflection and rotate buttons.

In our session, Greg and I stated the theorem that:

The number of partitions with distinct odd parts
is the same as the number of self-conjugates.

For 17, that number is 5.  We gave a way to create a self-conjugate from a partition with distinct odd parts (and vice-versa) which establishes a one-to-one correspondence.  Can you see how the two sets of five are related?

See the article on which our talk was based on the less-accessible wikipedia article that gave us the idea for more details.
Posted by Ross Isenegger at 3:36 AM No comments: