Good News on the Video behind the Firewall Front!

This news via the Using ICT in Further Education blog (you may notice that Patricia is number 1 in the International Edublogger directory and that I am eight times better than that!):

RealPlayer 11 (the basic, free edition) allows you to download video from popular video sites to your RealPlayer library.

Try it from my favorites...

Now, looking at the details in the RealPlayer Library shows that the downloaded file is an FLV. There are other players that you can use beside RealPlayer to show these. I use FLV Player. You may not have as many conversion options using RealPlayer, but you can avoid the pop-ups, ads and general worry that comes from using Zamzar.
Posted by Ross Isenegger at 8:04 AM 1 comment:

Sure, you could record something of pith and merit every week and post it up on iTunes, but I have been doing two easier things:

Hello, this is the listener's choice podcast, I'm Ross Isenegger in North Bay, Ontario. I would like to hear Shelagh Rogers' interview with Dr. Jane Philpott. Jane is a family doctor and mother of four. Having worked for nearly a decade in Africa, Jane wants to engage as many Canadians as she can in understanding the intolerable reality of the AIDS pandemic. She also has been involved in some creative, practical ways to make change happen. Jane had a daughter who died while she was in Niger but she is adamant that this is no more tragic that what is happening to millions of African mothers and grandmothers who are losing their children to preventable disease.

I have two personal connections to this story. First, I went to Glebe Collegiate Institute in Ottawa with Jane’s husband, Pep in the late seventies and was privileged to meet his remarkable family. As Jane and Pep worked in Niger, my wife and I followed their regular updates and were deeply moved by their sacrifice. Second, my daughter has been involved in AIDS awareness through two local initiatives: Patrick for Life and Youth4Youth. In fact, this month two thousand school children are walking a marathon over 10 weeks while increasing their awareness of AIDS and its local and international impact, culminating in a rally at the North Bay waterfront.

I was very happy to hear about Jane’s work since being in Africa on Sounds Like Canada and to learn of the website that outlines some of Jane’s efforts at giveaday.ca.


CLOSER: This is the listener's choice podcast, selected by me, the listener. If you ever hear something on the radio that you want to hear again, email podcasting@cbc.ca. You can program, and host, your own CBC podcast.

I hope you enjoyed my listener pick today on The Choice.
You, too, can request your favourite piece of radio. Contact The Choice through the website cbc.ca/sirius.

Posted by Ross Isenegger at 1:13 PM No comments:

The Forrest Gump of Presentations

If you are reading the same kind of blogs that I do, you have been seeing a lot of embedded Slideshares showing up. Today, at their blog, I read "Everything You Need to Know About Presentations from Forrest Gump (by Scott Schwertly)"

He lists five presentation lessons that you can learn from Forrest:

1. Understand that Presentations are Like a Box of Chocolates

3. Repetition is the Fruit of the Sea

5. Know What Passion Is

Number 2 would be qualified by Bob Garmston, I imagine, since he is quite worried about extraneous movement. However, a presenter like Scott, uses motion to really good effect.
Posted by Ross Isenegger at 5:15 AM No comments:

Are you reluctant to be a twit?

But Rodd Lucier's latest video has pushed me a little closer to trying Twitter.

Some of the add-on tools especially appeal to me. Who knows, maybe I will be buying a second car and subscribing to cable TV next.

What do you think about Twitter? Can a easily distracted fellow like me really handle it without becoming more of a twit?
Posted by Ross Isenegger at 3:38 AM 2 comments:

Developing the Sine Function for the First Time

This activity will be part of a much larger 'cluster' of activities in CLIPS. I would be very happy to receive any comments about its effectiveness or suggestions for improvement.

(If your screen isn't wide enough to see this, you can also access it directly)

The Monty Hall Probability Problem in the News

It is not every day that a famous probability problem is in the news. John Tierney of the New York Times has written a piece about the economist, Dr. M. Keith Chen's challenge to the traditional interpretation of a cognitive dissonance experiment with monkeys. The graphics in this article are especially good. I had to go looking for this piece since Dr. Chen was not given enough time on CBC's "As it Happens" to actually finish explaining his work. Dr. Chen asserts that the researchers made an error analogous to the one that many people make when faced with the Monty Hall problem.

The long-running game show "Let's Make a Deal" debuted in December 1963 and ran until 1977. The famous Canadian host, Monty Hall, played one game in which the contestant was presented with three doors, numbered 1, 2 and 3.

Behind one of the doors was a fantastic prize, like a car, and behind the other two were booby prizes, like goats. After the contestant chose a door, but before the door was opened, Monty sometimes would have another door opened to expose a booby prize. Although Monty never allowed it, people have speculated about what a contestant should do if they were permitted to switch their choice to the other unopened door. In fact, thousands of letters were received by Parade magazine, including some from professional mathematicians, denouncing the assertion in the "Ask Marilyn" column that the contestant would be better off to switch. This probability problem has become known as the “Monty Hall problem”.

There are lots of simulations and explanations on the web. If you buy the book I co-authored, you can even create a simulation in Fathom.
Posted by Ross Isenegger at 4:13 PM No comments:

Prove that you are human

From the Top 10 Worst Captchas via Jane's E-Learning Pick of the Day: 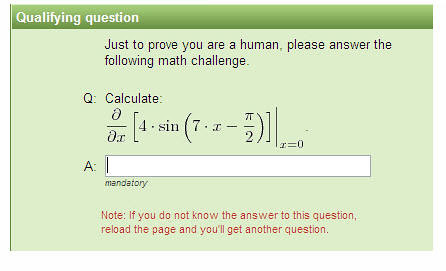 It reminds me of the aerobics in hell cartoon.

Posted by Ross Isenegger at 6:10 AM No comments:

If it is on that popular video sharing site, it must be true

Here is the video from the highly reputable BBC used to launch its iPlayer.

Posted by Ross Isenegger at 4:44 AM No comments: