I don't usually feature my family here (with rare exceptions), but will now.  Jonathan was one of two actors in Salt-Water Moon at the Sears Provincial Showcase and came away with an award of excellence for acting together with Sam.  The play, by the late David French, is a lovely story and the two actors, together with their stage manager, director, costume and set designers rendered it beautifully.

Here is a piece from the radio where you can get a sense of their Newfoundland accents and stage chemistry.


And here they are with their award. 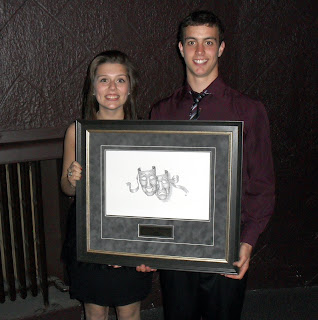 Two cewebrities at one session

I am at the OAME 2012 Conference in Kingston, showing folks the new CLIPS wrapper, calculator and Multiplying Fractions Activities in development mode.  I did get a chance to see Dan Meyer's presentation on Thursday "Why Kids Hate Word Problems".  It was a sensible, craftful, and powerful appeal.

A delightful part was that by coincidence I sat next to another internet sensation, Mr. O.  Faithful readers of this blog (a bit of useful fiction) will remember my earlier post about this teacher at my alma mater and his 15 minutes of internet fame.  That post had some of the details wrong, apparently.  Mr. O was flown to Portugal for the making of a movie about the perfect circle and spoke at Art Basel, in Switzerland, about his experience.  He even spoke to producers at the Letterman show. Apparently, the video was shot in June 2006 by Glebe's webmaster, who you can hear in the background, and posted to their site where it received about as much interest as this blog.  In January, some kid in North Dakota posted it to YouTube, College Humor and some other sites.  It went viral and was YouTube's featured video for two weeks.  Mr. O. did not until that time even know what YouTube was.  He does now.

In case you require documentation, I have embedded the footage from the World Championship.