I am just back from the OAME Conference in Ottawa, the city of my up-bringing. As usual the conference was a great experience and I even stayed a day and enjoyed scaling the Gatineau Park on a bicycle.

I helped to nominate Joel Yan for a well-deserved OAME award. At the banquet, he told a hilarious story about being fired from a volunteer job for his love of Math. It turns out that he was volunteering at the bingo hall selling tickets and the like when his big break came. The caller was leaving and they needed someone who could talk loudly, read numbers in English and French and be enthusiastic. Joel fit the bill. He correctly called B8, but when B9 showed up next he called "Add one". There was a lot of confusion and an official warning to "just call the numbers". Joel behaved for a night or two, but when 32 rolled out of the machine, he couldn't help but call "two to the fifth", thus ending his stint as a Bingo caller.

The OAME banquet featured some comedians from Absolute Comedy. The first comic had trouble following Joel, since he had a paucity of exponential humour. Rick Currie came up next cracking jokes about assessment, government workers and the like. My favourite was his ending song about Billy Bob Thornton. You can find some of his other bits on Youtube, but I have his permission to post this bit here.

If you haven't seen the interview - it is worth seeing just for the cringe value.

Once you have watched that, the song below will make more sense.

Here is a photo of Joel and I. 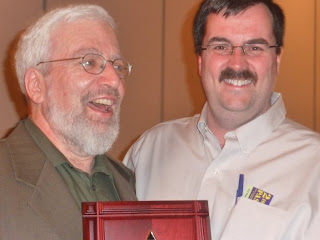 Posted by Ross Isenegger at 6:24 AM

Ross: Thanks very much for nominating me for this award. I am truly honoured to be the recipient of this award.
Joel Yan :-)

Thanks for having me and glad you enjoyed the song.

@Rick - Thanks for letting me post the song. Your rating reminds me of the OAME Conference in Barrie, where John Allen Paulos told us that 69.32% of statistics are made up on the spot.