Make your own saccharine posters

In an earlier post, I featured despair.com's hilarious versions of the pervasive motivational poster.

Now you can create your own online at AutoMotivator. It may not motivate anyone, but it might be an interesting student task. I did this one in about 10 seconds. I think it shows. 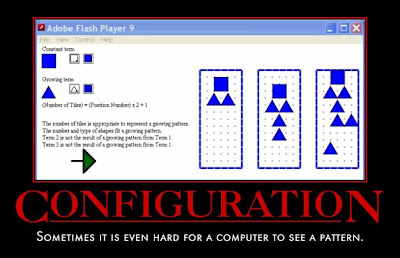 The Parody Motivator Generator at despair.com is also a lot of fun. Here is the description from their site.

The War Against Motivation Continues.

For over two decades, the multi-billion dollar motivation industry has unleashed untold suffering upon the workplaces, schools and civil institutions of the world- in the insidious form of the motivational poster. By the millions they have been sold and displayed- these dark instruments of corporate propaganda. While promising to stimulate "Hope", "Success" and "Teamwork", instead these tools of coercion and intimidation have inspired only grief, anger and nausea.

In 1998, one company dared to fight back, as Despair, Inc. introduced Demotivators®, satirical products reverse-engineered from the most powerful motivational posters ever inflicted upon mankind. And now, with the Parody Motivator Generator, we place those very same tools in your less-capable hands- giving you a chance to join us in the battle against an opponent as ubiquitous as it is idiotic. The chance to not only create your very own motivational parodies online, but also to purchase beautiful 11"x14" prints of your designs.

Now, Join The Battle and Make Your Design.

The question designed to elicit the never-appearing comments intentionally left blank.
Posted by Ross Isenegger at 3:25 AM

More at http://www.despair.com/deviall1.html - love the Toyota one!